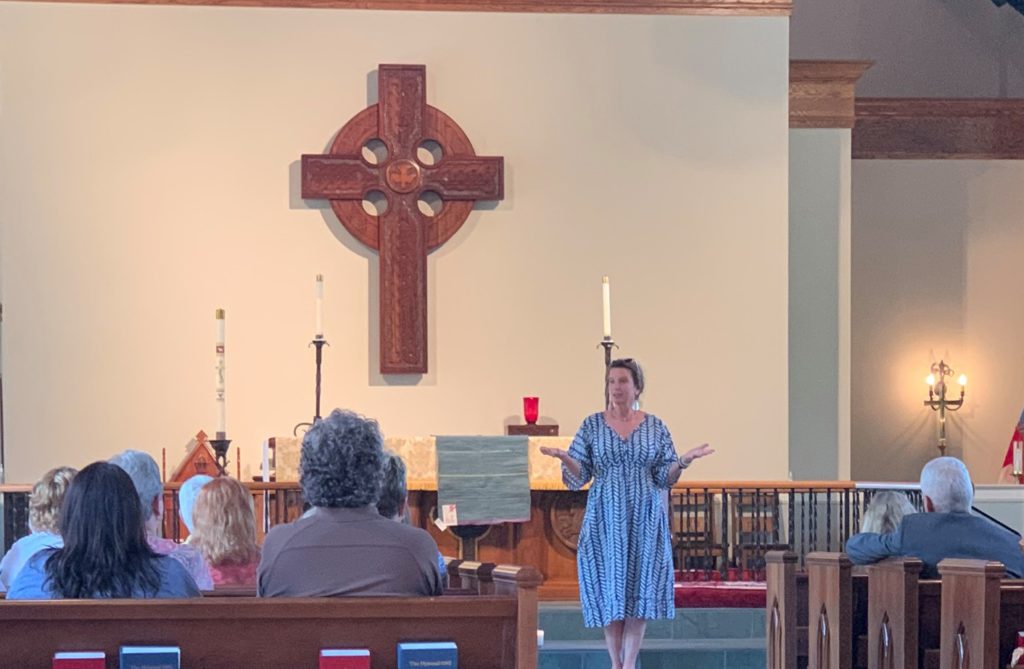 On May 19, a lovely Sunday afternoon, approximately 80 people gathered in the nave at St Paul’s Episcopal Church to hear from The Reverend Becca Stevens, author and founder of Thistle Farms, a social enterprise aimed to empower women who have been abused. She talked about a subject many of us would rather avoid; women who live on the streets. Her talk was anything but a downer, though; she focused on the help that her ministry offers to women willing to accept it.

The organization she founded in 1997, Magdalene, offers much more than food and shelter; it provides medical and dental care, therapy, and an opportunity to contribute to their own support and learn marketable skills while encouraging residents to leave the streets and the habits that keep them there. Resident women manufacture, package and market natural home and personal care products, everything from bug-spray to bath salts. The income from the sale of these products provides 70 percent of the support of Magdalene.

The women – they call themselves survivors — are especially proud of their candles, not only for their quality but also for their symbolism.

Ty, one of the graduates of the program, told us the women light a candle every morning for women on the street who have not found their way home yet. The candlelight, like a beacon, welcomes them home. Ty had been homeless for eight years living rough on the streets. Now, she has a driver’s license, a car (which she is proud of the deal she got on it by the way,) and has earned her GED. She is ready to live on her own with dignity, safety, and self-respect. 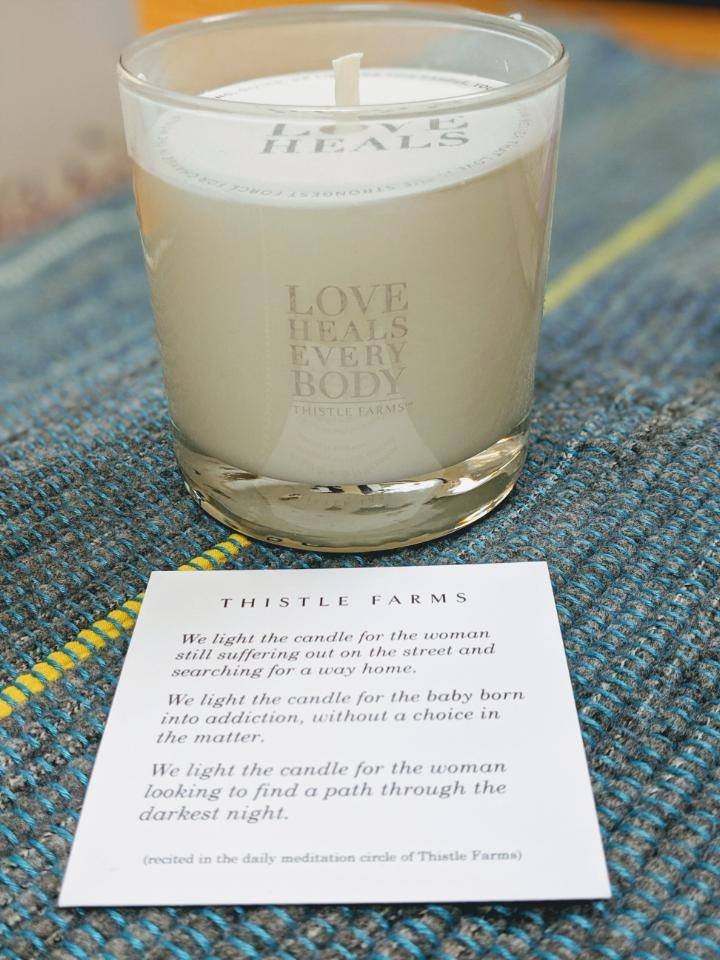 After hearing from Ty, Becca herself, who is also a survivor, spoke. She was sexually abused from age five. She remarked on how hard it is to talk about an abusive sexual history. Even though abuse is not the fault of the victim, there is such sense of shame and self-loathing associated with being a victim that many bury it deep in their psyche leaving their personalities less than whole.

Becca’s talk was organized around a song and dance we all associate with childhood fun: “The Hokey Pokey.” According to Becca, it was written to make fun of the “hocus-pocus” that priests appear to be engaged in at the altar. As a priest herself, she thinks the song and its history are hilarious. She also sees it as a metaphor for the healing process. She mentioned bazaars, dear to the hearts of youth and women’s groups as money makers. She pointed out that in terms of economics, they are extremely inefficient. People make things at their own expense, then sell them to each other. They might have more profitably thrown their money in a pot and saved all the effort. But that’s not the point. People put themselves into the things they make.  As the song says, they “put their whole selves in,” and that is much better than a simple cash donation.

Then comes the line, “Shake it all about.”

“The disciples went out from the Last Supper and shook up the world,” Becca said. Another part of shaking things up is letting it go, “it” being fear, anger, shame, bitterness. She told us another part of Ty’s story. Ty had been safe at Thistle Farms, working, paying taxes. Then she was arrested on an old warrant. Despite Becca’s testifying to the fact that she had turned her life around, the District Attorney made her serve a jail sentence of three years. When she returned to Thistle Farms, she just wanted to keep pouring candles and forgive. When asked how she kept up her spirit through her ordeal, she said “I knew loving friends were waiting for me.” The candle in the window was still burning.

“We must have the courage to speak of the unspeakable,” said Becca. We must shake it up and let it go.

Becca founded Thistle Farms in 1997 with five women who had experienced trafficking, violence, and addiction. Now, according to Thistle Farm’s website, “the Global Market of Thistle Farms helps employ more than 1,800 women worldwide, and the national network has more than 40 sister communities.”

A place such as Thistle Farms is “a mission with a church, not a church with a mission,” a place to “turn yourself about.” 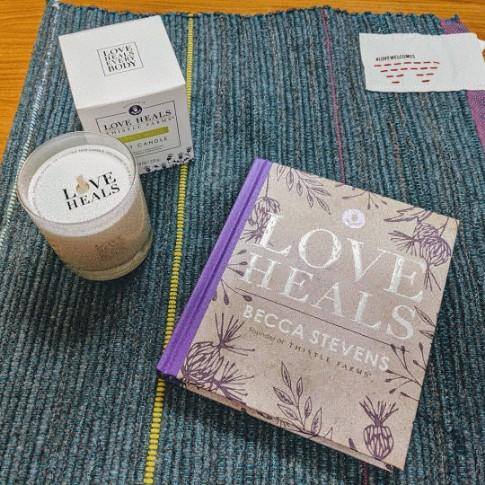 Becca told us of an especially difficult set of circumstances in 2017, at the height of the refugee crisis, where her group was able to turn things about. Desperate women were frequently stuck in refugee camps such as a notorious one in Greece. The men would leave to find new lives in Europe, but the women and children were often left behind. Without fathers, brothers or husbands as protectors, they were vulnerable to human trafficking. Philanthropic organizations find it extremely difficult to get into such camps to help, but with financial support from Wendy Schmidt (whose husband is the former Executive Chairman of Google) Becca’s group was able to organize five women who used their weaving skills to earn much-needed money for necessities not provided in the camp, such as dental work and fresh food. They wove welcome mats from the blankets and life jackets they had used on the crossing over the Mediterranean, where so many others had lost their lives. They sold the mats, trained other women, and were eventually reunited with their husbands.

Becca quoted Jolie Varela, founder of Indigenous Women Hike, who said in an interview, “The healing of a community begins with its women.”

“Love is the most powerful force in the world because love has the power to heal,” says the Thistle Farms mission statement.

Isn’t it time we “turned ourselves about?”

Visit Thistle Farm’s website to learn more about Becca’s accomplishments, vision, and the wonderful products you can order. Oh, and you can also donate here. 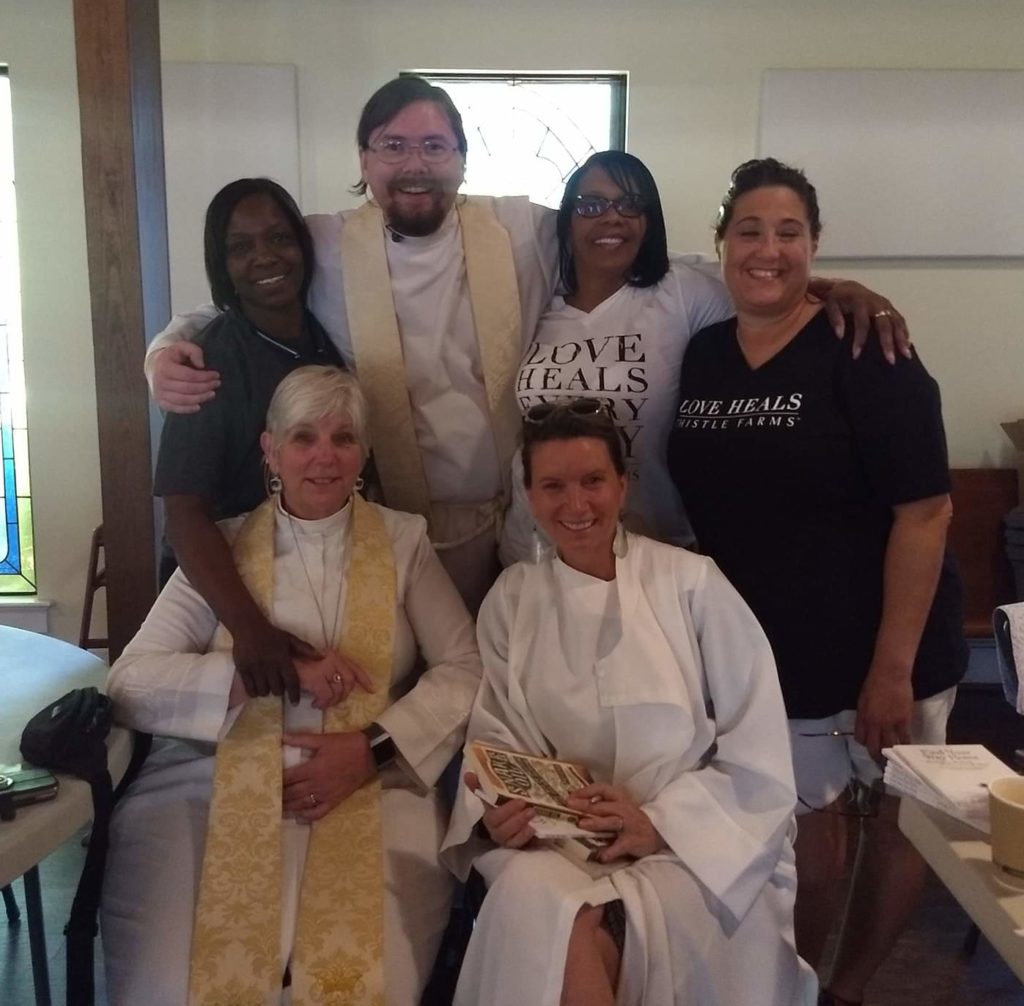