HOLY BIBLE
CONTAINING THE
OLD AND NEW TESTAMENTS
TRANSLATED OUT OF THE ORIGINAL TONGUES, AND WITH THE FORMER TRANSLATIONS DILIGENTLY COMPARED AND REVISED
WITH REFERENCES AND VARIOUS READINGS
PHILADELPHIA
PUBLISHED BY E. H. BUTLER & CO.
1859

The above is extracted from the cover page of this Bible. In early 2019, this Bible was found on a high shelf in what was once the sacristy in the original building, now the Children’s Wing. 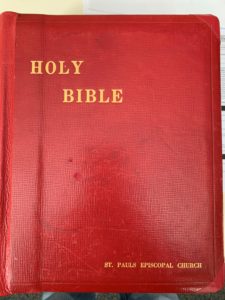 The binding was damaged, due to old age. It has now been repaired and restored, due to the generosity of a parishioner, and is on display in the Narthex.

No one seems to know the history of how and when the Bible came to be a part of St. Paul’s history. According to a book on Coweta history, the original “St. Paul’s Episcopal Church was established in Newnan in 1882 with services first held in Thomas Hall, on the west side of the courthouse. Later a small traditional white frame church was erected on Wesley Street at the intersection of Jackson Street… For reasons unknown, services were discontinued, and the property was sold in 1914… In 1954, Charles Van S. Mottola, Jim Hardin, and Beverly Upchurch conferred with Bishop Claiborne, who consented to establish an unorganized mission in Newnan… To maintain continuity with the original church at Wesley and Jackson Streets, permission was requested, and granted, to retain the name St. Paul’s.”