Her Second Journey on the Camino de Santiago

In April of 2019, shortly after a strenuous Holy Week and Easter Day, our Priest-in-Charge made her second journey to Spain to walk the Camino de Santiago.

In a sense, she was continuing the pilgrimage she and her daughter began 5 years earlier. At that time they hiked 300 of the 500 miles on the Camino Francis route to Santiago. After arriving at the famous cathedral containing the bones of St. James the Apostle, attending the Pilgrims’ mass (complete with the giant thurible swinging incense), they were awarded pilgrims’ certificates. That year marked the 800th anniversary of St. Francis’ pilgrimage to Santiago so the 2014 certificates were unique to that year. However, the most profound moment for Hazel was not the pilgrims’ mass but hiking up to the Iron Cross on Rabanal. “We arrived at the cross just as day broke. Each stone at the base of the cross represented either a person who had died or prayers for the living. The power of those prayers represented by the stones was palpable. I felt like I was standing in the midst of the communion of saints.” 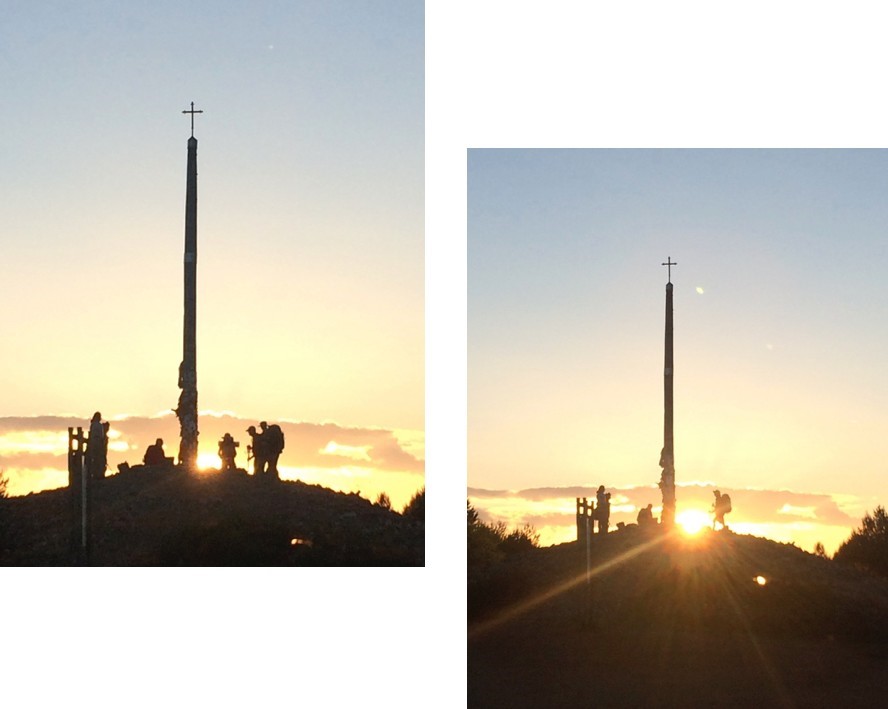 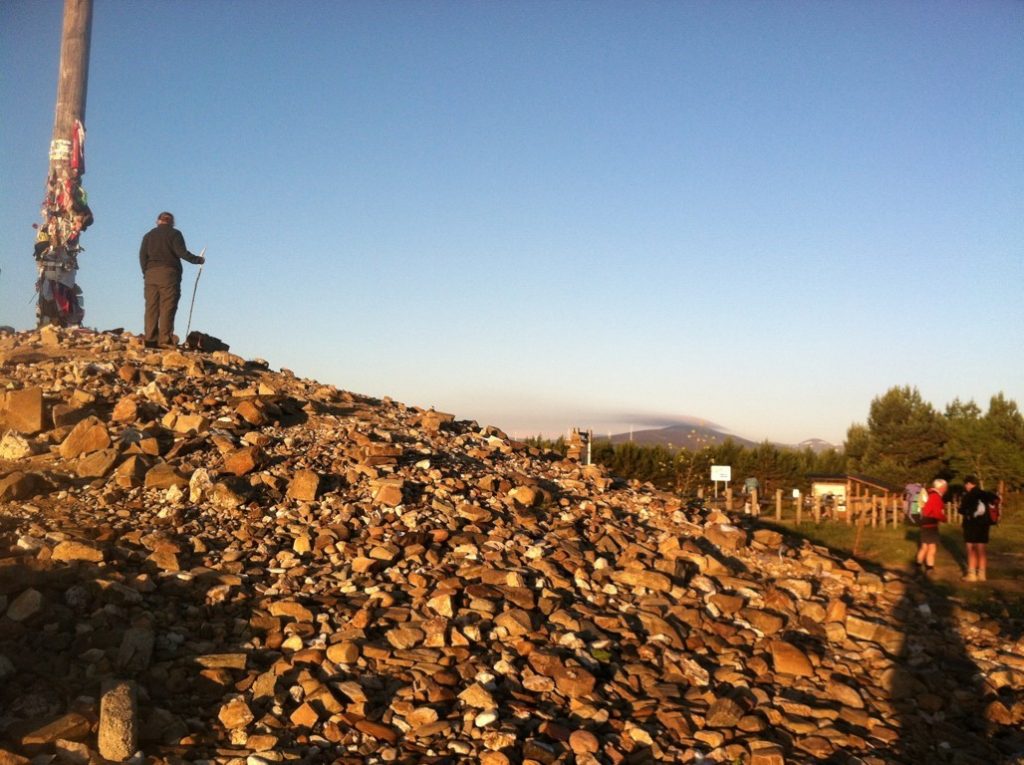 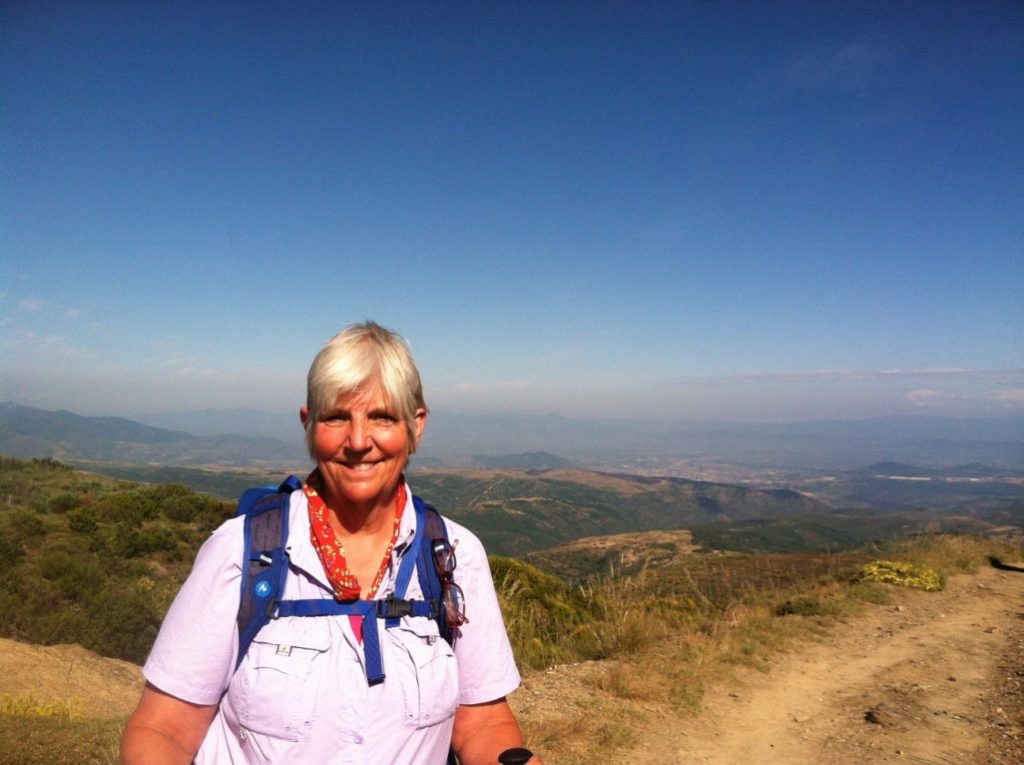 “The slate trail down Rabanal was very steep and it was raining. I didn’t slip but I was so tense that my back seized up.” By the time they hiked to Ponferrada they decided that they should not attempt to conquer the next mountain. They skipped O’Cebrerio riding the train to Sarria. 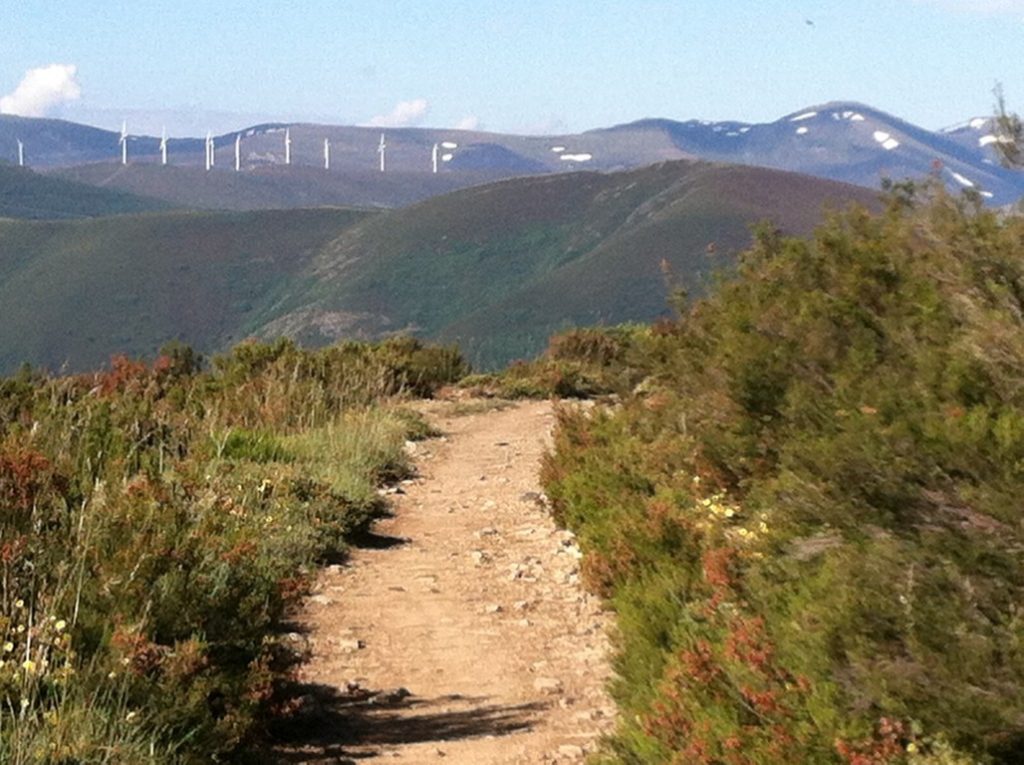 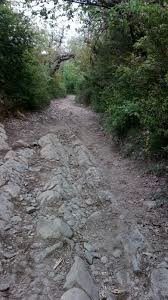 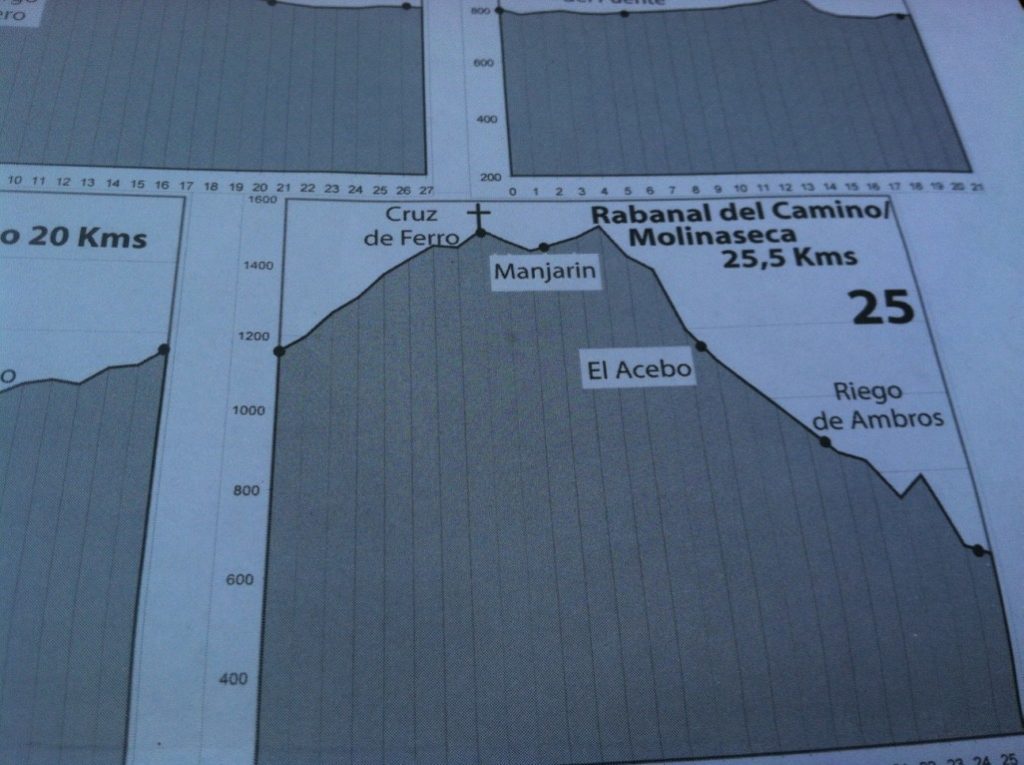 Hazel was determined to go back one day and hike the leg of the Camino from Ponferrada to Sarria. She got that chance in 2019 as she and her son, Patrick, spent two weeks on the trail, picking up the trail at Ponferrada. “I was so glad I’d been there before, because I knew the lay of the land. Just showing the beautiful landscape to Patrick was fun.”

There were other advantages to making the trip for the second time. “My focus on this portion of the Camino shifted to focusing on the journey rather than the destination, walking slowly without worrying about how many miles we were clocking, sleeping 100% of the time in private pensions or hotels as opposed to the bunk-filled albergues. Martha and I were walking two to thirteen miles a day. Patrick and I didn’t walk more than four hours in any given day. I just wanted to soak it all in – which we did.”

“We spent the first night in Ponferrada, and then we began our walk to O’Cebrerio.” ‘’

From there Hazel and Patrick made their way over a lot of mountainous terrain to Sarria. On the way they visited the ancient Castle of the Templars. They spent two nights in Sarria, then took the train into Santiago, a first visit for Patrick.

“The spiritual experiences weren’t just in churches but in nature. Just hearing your footfalls on the road was holy. We walked in silence often. There is nothing to think about, nothing to worry about except where you will eat and sleep. The most difficult moments were seeing dogs and their owners in villages or along the route because my dog was at home.”

“We met pilgrims along the way, in these little cities. When we met some folks from Canada. I asked them if they were from Newfoundland where Lesley (our parish administrator) was born and raised. They replied ‘Oh no. That’s not really Canada.’”

They were from Ontario. (If you are Canadian, that explains everything.)

“Atop O’Cebreiro we met one Canadian marathon runner and hiker. He said he didn’t sleep for the first two weeks because he had stayed in albergues. The snoring and body noises combined with jet lag contributed to his exhaustion.” 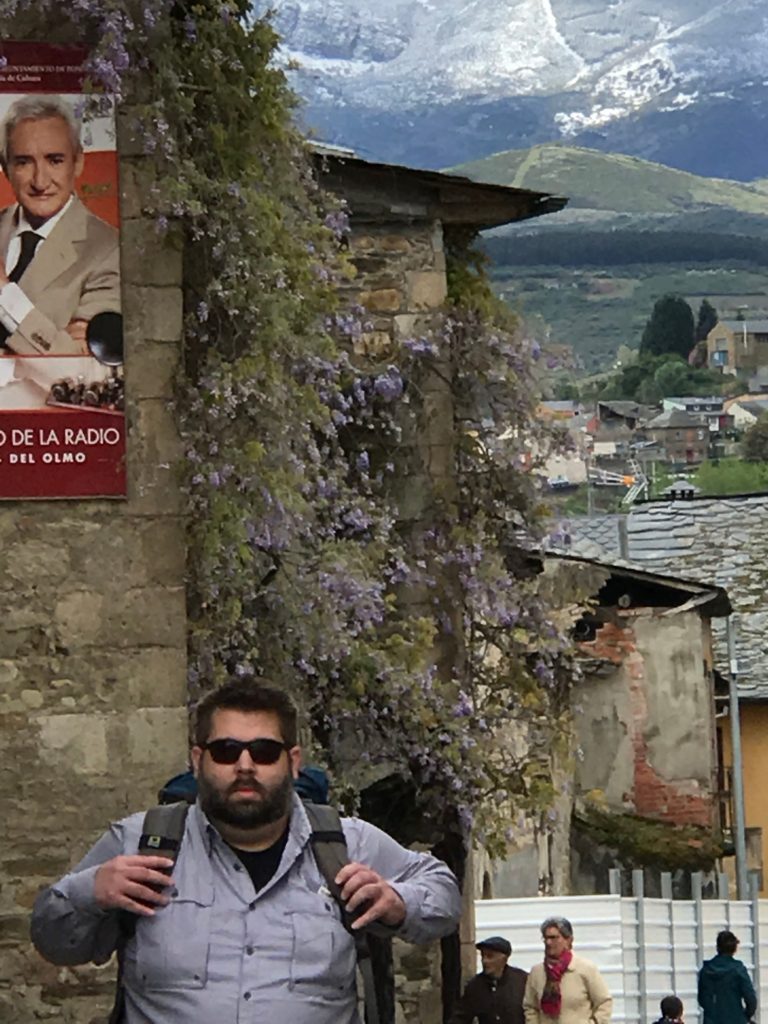 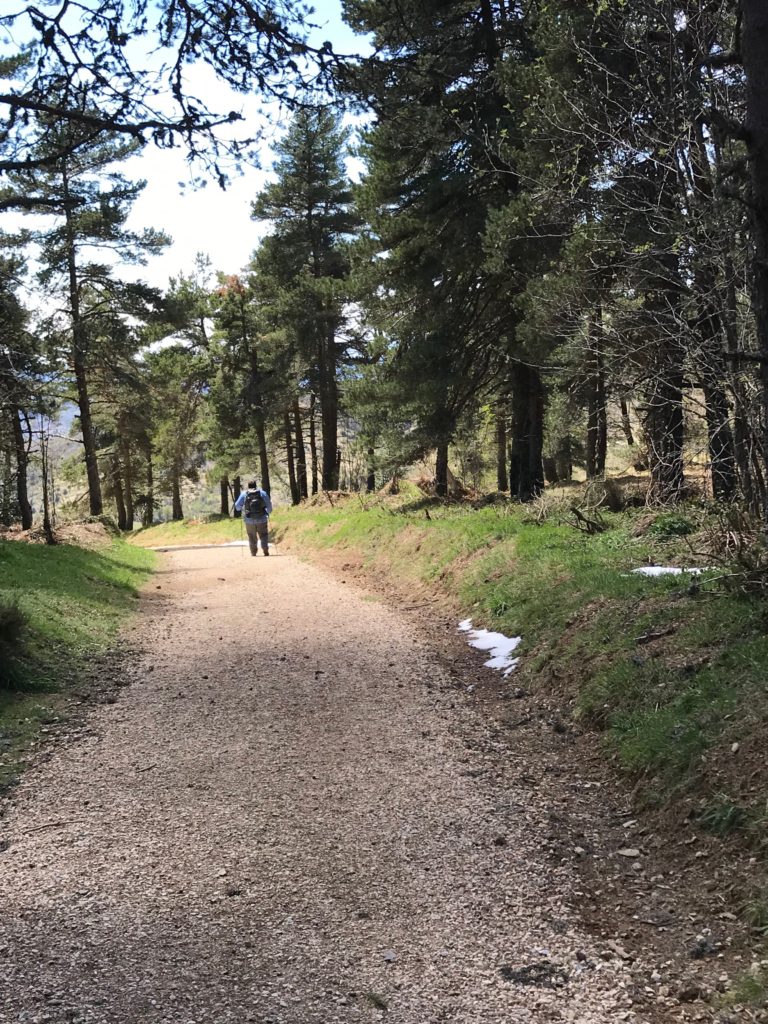 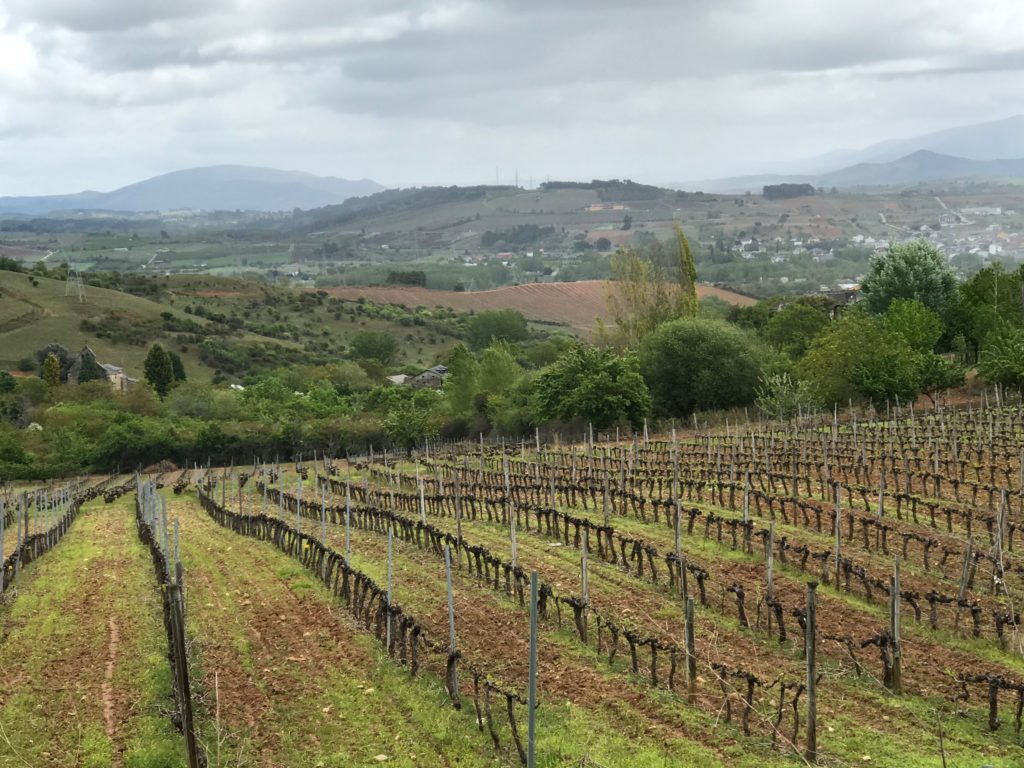 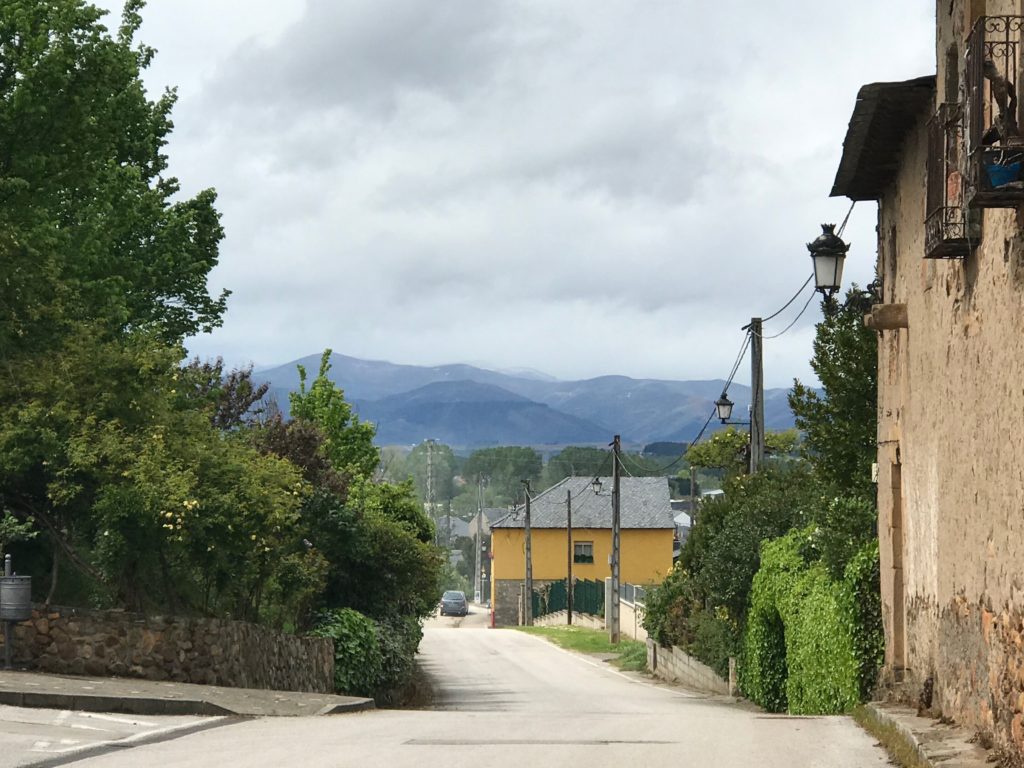 Just as the Iron Cross was a sacred experience for Hazel in 2014, this year being in the hamlet of O’Cebrerio was profound. “I am still processing the spiritual impact of O’Cebreiro and the ancient church of Santa María la Real (dating from 836) on my soul.” 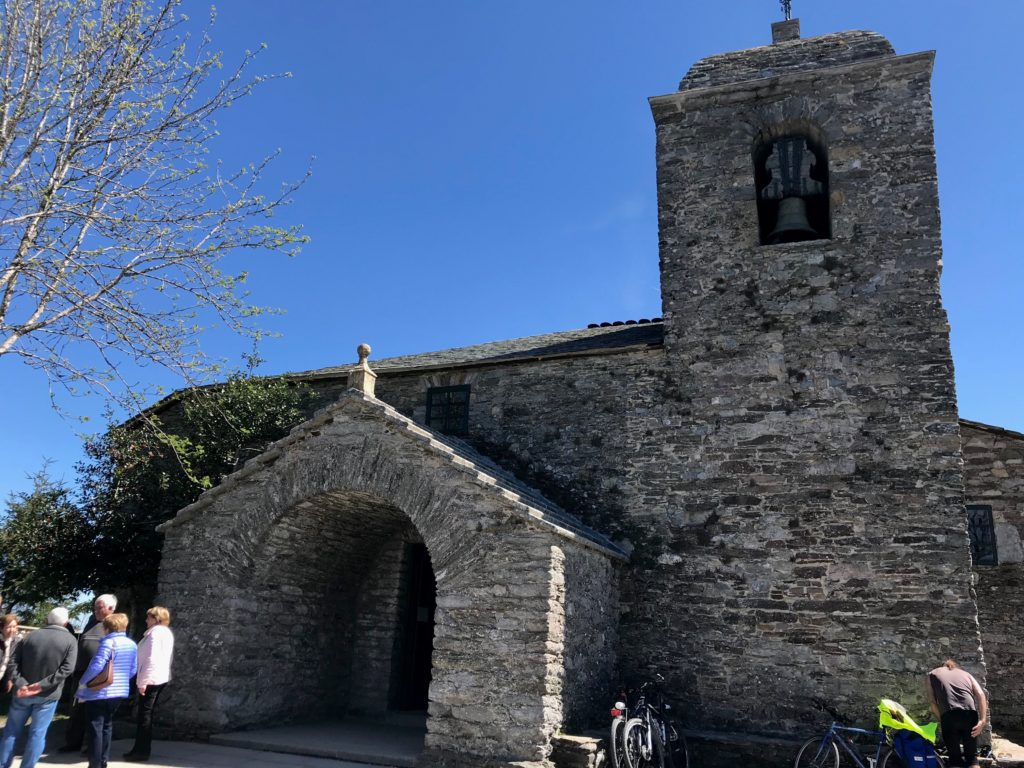 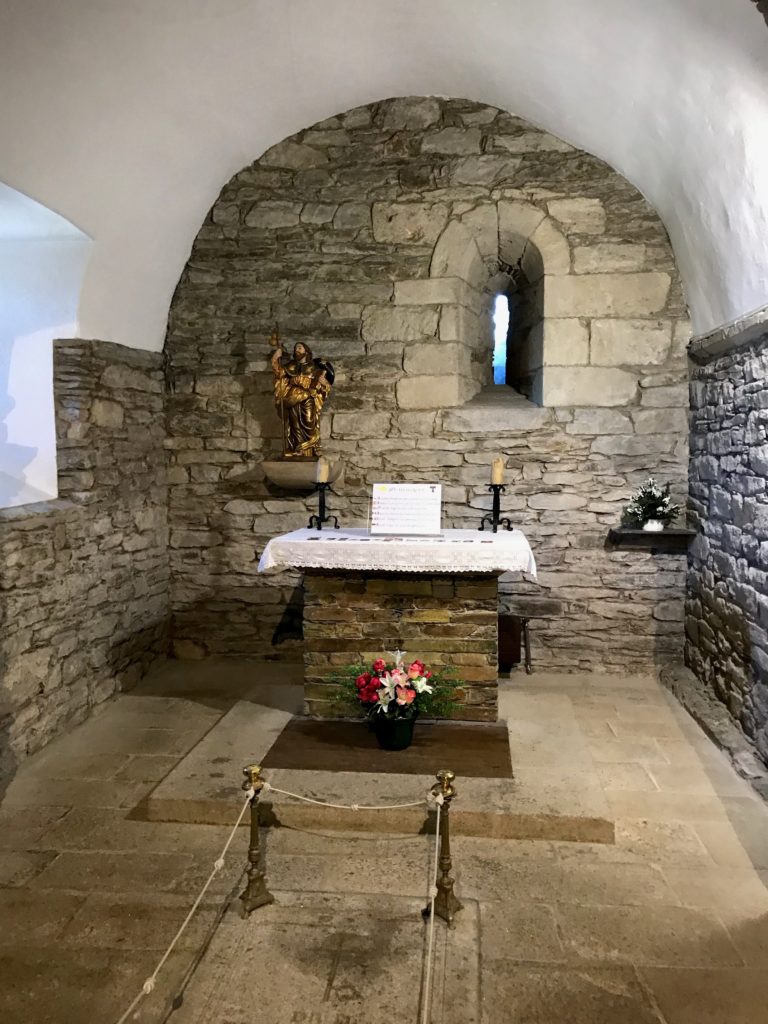 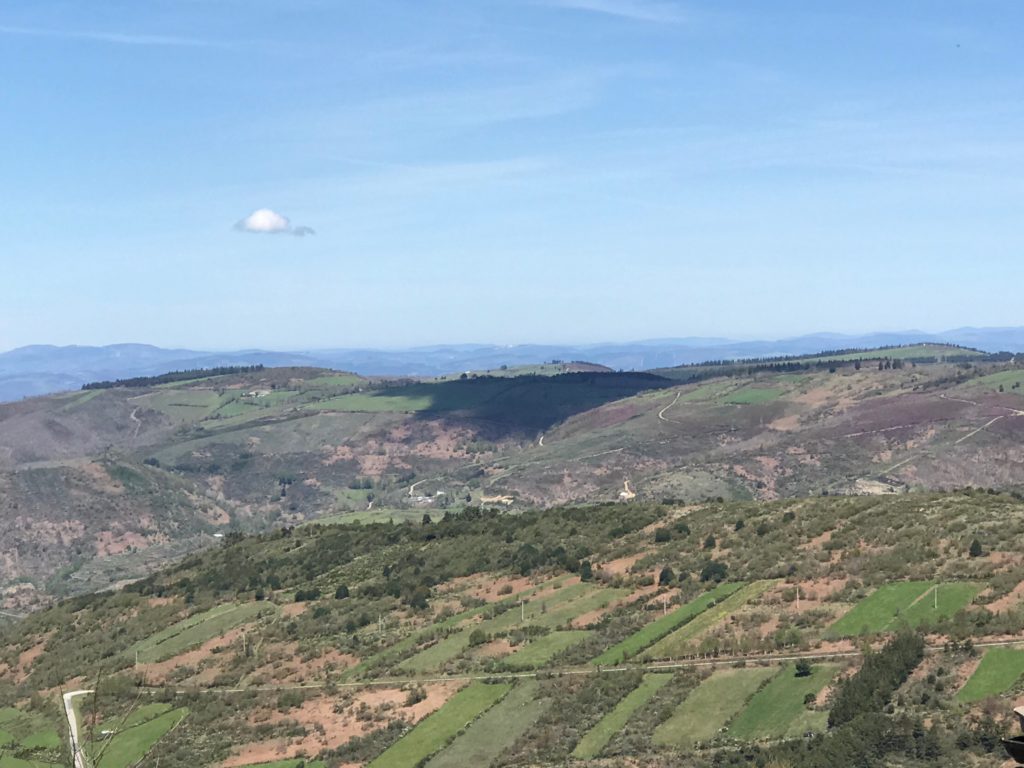 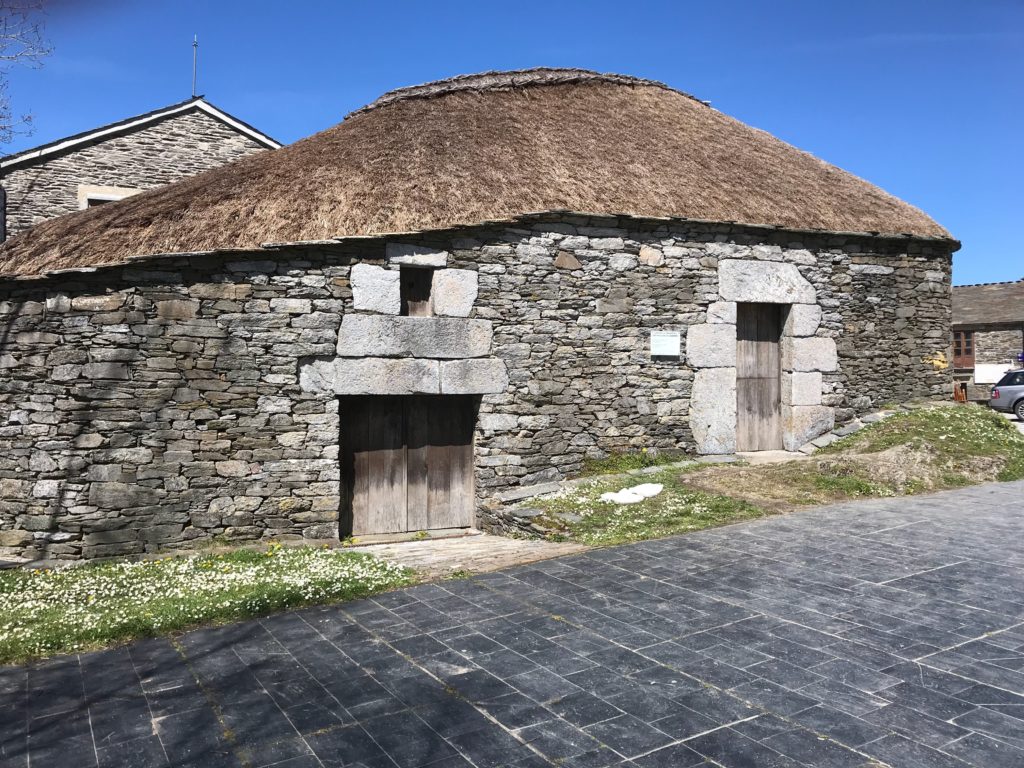 “We spent several nights in Santiago exploring the city. We attended the pilgrims’ mass that had been moved to San Francisco parish because the cathedral was undergoing internal renovations. To be in the midst of pilgrims who had traveled together and some who had met on the road was energizing. Additionally, we spend time hanging out in the courtyard of the Cathedral de Santiago watching as pilgrims arrived at the end of their pilgrimage.” 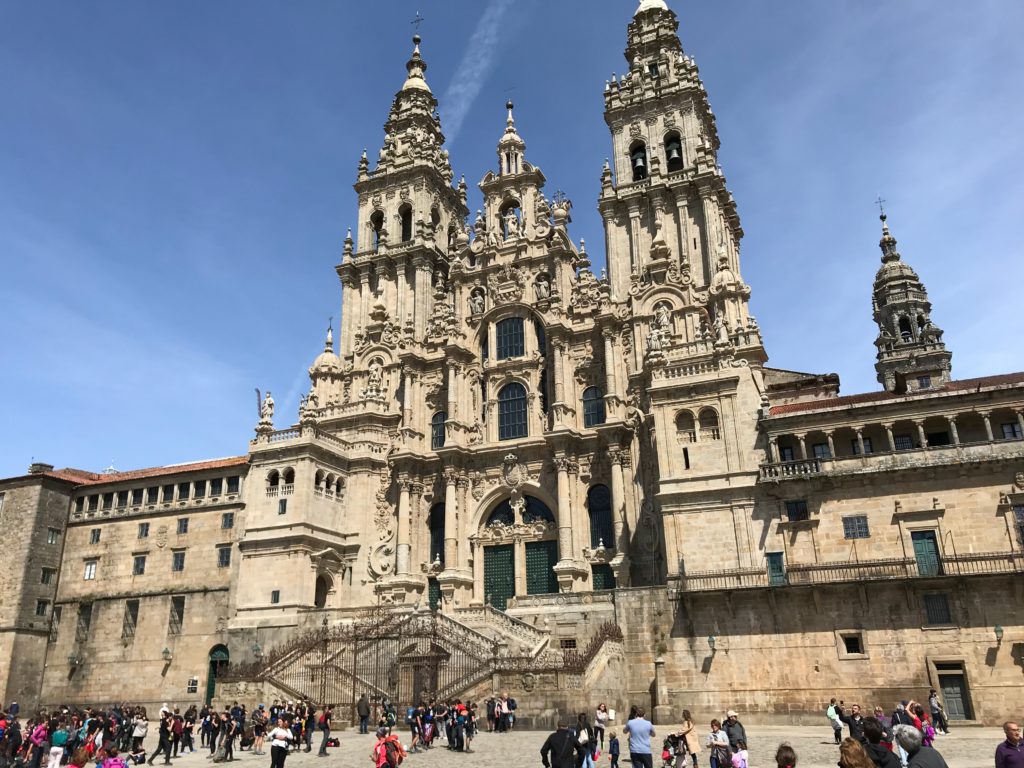 Patrick and Hazel arrived in Madrid on Saturday night, May 5th. On Sunday, Cinco de Mayo, they googled Mexican restaurants. “Finding one, we took an Uber into the city for a couple of margaritas and nachos.” 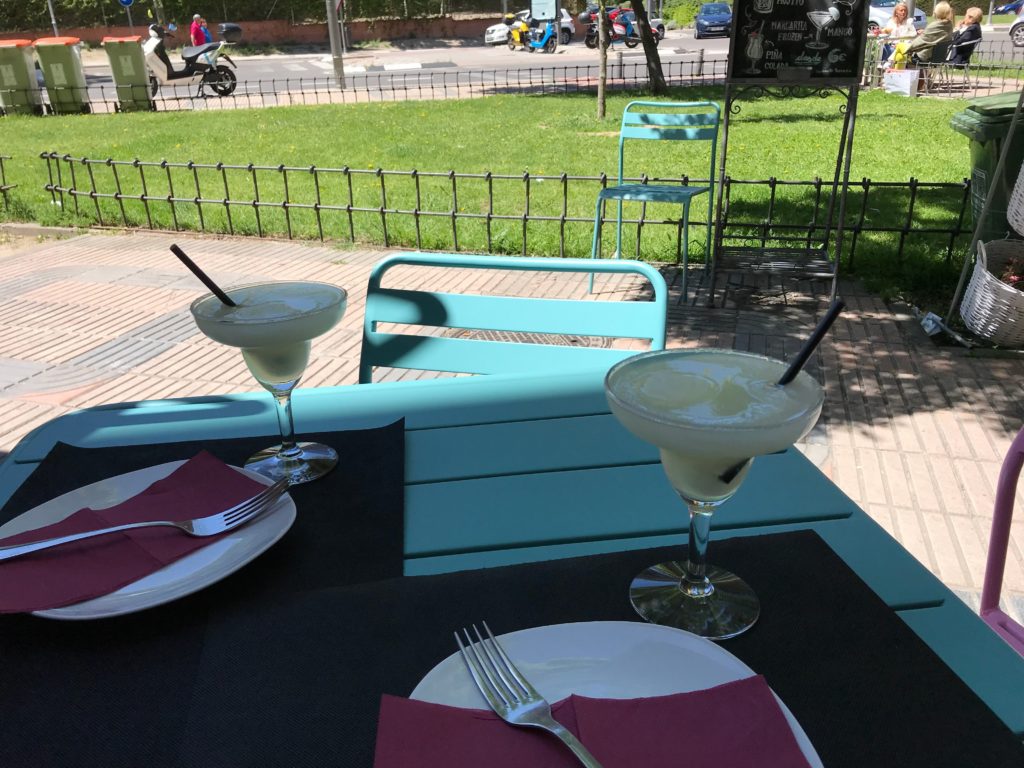 “I return to St. Paul’s with my heart full and my soul refreshed.” Buen Camino