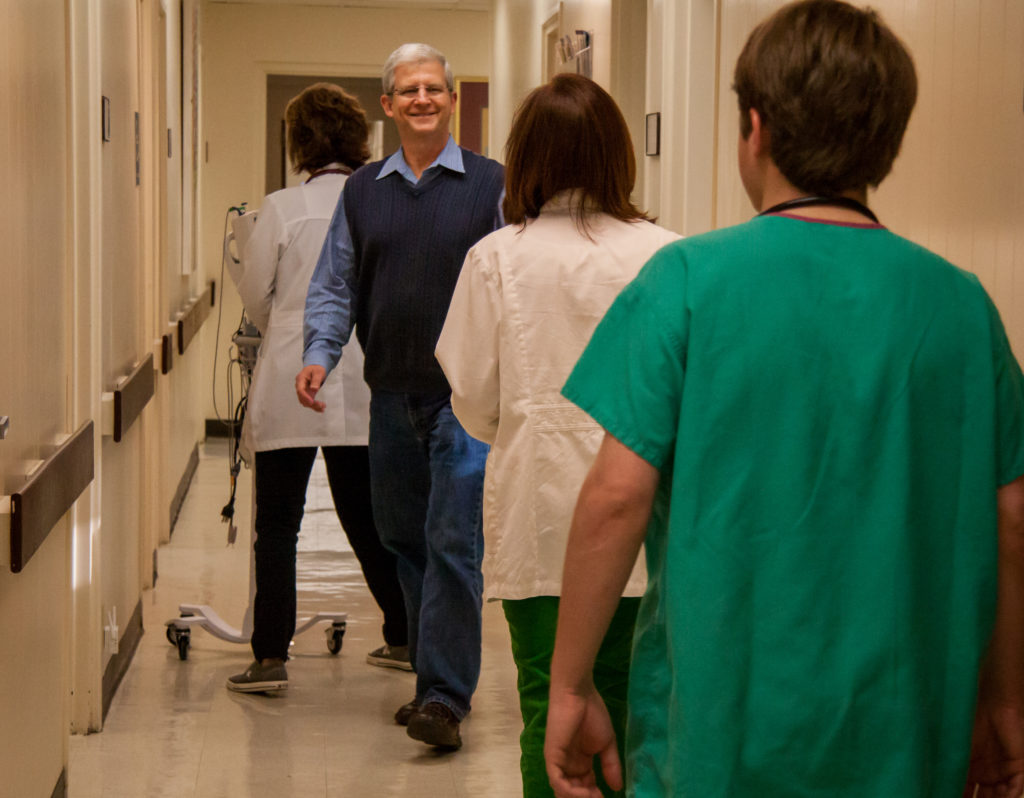 He retired in March of 2019, but for almost eight years, Lou Graner was the Executive Director of Coweta County’s Samaritan Clinic. Moreover, he played an essential role in the planning and financing of this life-saving facility. The Coweta Samaritan Clinic offers free primary medical care to uninsured Coweta County residents with limited incomes.

“Just in the time I was there, we treated about 1,600 people and had crossed the 20,000-patient visit level,” said Lou. “A tremendous amount of good is being done.”

I wanted to know more about this modest man who had played a vital role in launching and operating the Samaritan Clinic.

Joan: Lou, what led you to be one of the movers and shakers who started the Samaritan Clinic?

Lou: My involvement comes right back here to St. Paul’s. One day ten or so years ago, I was meeting with Bill Harrison. We were just chatting about poverty and different things. Sharon Gruber was the volunteer at the desk. She was good friends with Kay Crosby and the others who were thinking about starting the clinic. She heard us talking and just ducked her head in and asked, “Do you have any interest in coming to a meeting and looking at what we are thinking about?” I said, “Sure.” So it really started right here in St. Paul’s, or I might not have known about it.

Joan: Something inside you must have felt drawn to this meeting. Can you express what that was?

Lou: When this opportunity presented itself, I was between jobs. I had been in the non-profit world for about fifteen years. The one thing I had never done was anything in this community, and this was something I really wanted to do. I’ve always been interested in dealing with poverty and the people who truly don’t have any breaks.

I had done fund-raising for the Scottish Rite Children’s Medical Center, which is part of Children’s Health Care now. I had also worked at the Atlanta Union Mission, which is an emergency shelter and addiction recovery center for men and women. That was the area of non-profit work that really spoke to me, which I found most fulfilling.

So obviously what was being contemplated here was very interesting. I just rode the coattails of an awful lot of people. People of this community are extraordinarily generous with their time and with their resources: Dr. Kay Crosby, for example, who volunteers her services, had been an internist for twenty years at PAPP Clinic, and so she was very well known and respected. I think to this day that she continues to drive that support. She is still there.

Joan: Tell me more about your role.

Lou: I had some small role in it, but it’s really the generosity of the community and the way things have come together. I’ve never been in a place where the hand of God was so evident. Just for the facility itself – some of the places we were looking at would have been much more expensive and would have proven to be too small almost immediately. When the Health Department moved from the building where the clinic is to Hospital Road, the County took over the building, did a little rehabilitation work on the HVAC system, and leased 9000 square feet to us for a dollar a year.

Joan: Are there other examples of the hand of God at work?

Lou: There were many. For instance, one day Peggie (our nurse/administrator) commented, “You know, we could really use another blood pressure machine.” It wasn’t two days later when somebody from Welch-Allyn knocked on the front door. This guy is holding a stand with a blood pressure machine. He says, “We have an extra one. It’s from one of our clients. Could you use it here?” That’s not an exception. It was more the rule.

We like to say the Samaritan Clinic is Coweta County citizens caring for their neighbors. All the doctors volunteer their time. None of them are getting paid; only some of the medical staff, such as nurses and physician’s assistants.

I feel really good about what’s been accomplished. It was such a rewarding experience to be part of it.

Joan: What made it so rewarding?

Lou: Instead of fund-raising and writing checks as a donor, it’s kind of like – well, how do I get my hands dirty on the front line? So that was my evolution – to move into the direct provision of service and to use my accounting and financial background to benefit that organization. Anybody who has done service comes to realize you get so much more out of it than you put in. That was true for me.

Every employee, at least during the time I was there, started as a volunteer. We always thought that was really cool. We would say, what are the most important qualities, and who has passion for the mission? Everybody at the clinic had chosen to be there as a volunteer, so ultimately when the position was needed, these were the people best qualified for it.

Joan: What exactly was your position?

Lou: Executive Director. I was in charge of all the fund raising, community relations, accounting, and budgeting. There were nine employees when I left: three full time and six part time.

Joan: Your pride and satisfaction in your contribution come through loud and clear. Not everybody with a CPA, folks involved in the world of money-making, would feel this way. What is in your background that leads you to this passion for helping the  less fortunate?

Lou: My family was not heavy church. But my parents modeled service. My Dad did a lot of stuff free for people. He was a sports announcer in Cleveland, so when he made speeches for Boy Scouts, for instance, he never charged. My parents sponsored a child through the Christian Children’s Fund. Because of their example, I started sponsoring kids when I got out of college. I was writing checks, and that was a good step for someone that age to be giving back.

I was working for profit at that point for a company that did real estate and construction. Wonderful folks.  But one day I looked in the mirror and asked myself, do I want to keep helping rich people get richer? That’s not enough. I decided I wanted to move into non-profit and try to help. I ended up in Children’s Health Care of Atlanta, not your typical non-profit in the sense that it’s been incredibly successful. They’re saving lives right and left, and they do it with unbelievable quality.

The Christian Children’s Fund serves kids in poverty around the world. At one point, Anne and I were sponsoring eight. We’d pray for each one. Every night at dinner the kids would rattle off their names. But finally I realized that if everybody’s writing checks and nobody is doing the work, nothing’s going to get done. So what can I do?

The Samaritan Clinic provided the opportunity to do something in Newnan and give back to this community, which I really am thrilled that I did.

Joan: You must have met a lot of wonderful people in your quest for donations.

Lou: One of the donors at the clinic told me about a man she met in an airport in Florida. Somehow they got onto the subject of philanthropy. He shared with her that he has decided he wants to give his money where he casts his shadow. She took that to heart. She said to herself, “I’m here in Newnan. I’m not casting my shadow in India or other places.”  So she changed her philanthropy dramatically to the benefit of the clinic, the Humane Society, and a number of other local charities. She is now giving where she casts her shadow.

Joan: Do you have other passions? What do you want to do next?

Lou: For some reason, seasons came to mind. Having just finished up my time at the clinic, to some extent, passion-wise, I’m in winter. I had the summer and the bloom when the clinic opened, and all the great things it did, then kind of found myself a little worn out and questioning myself as to whether I was the best person to take the clinic to the next step. Now the leaves have fallen off, and I’ve chosen to step back.

I’ll always be passionate about poverty and the less fortunate, but I don’t know what the next step will be. Bur the beauty of the seasons is, I may be in winter, but spring is coming. The blooms are going to come out. I’m totally confident my next step will be shown to me.

Anne and I, on our own paths and somewhat in a shared way, have always been interested in spiritual growth, so that’s always going to be a passion.

The whole concept of simplicity just speaks to me, and I don’t mean in the narrow, clean-out-your-closets, keep-it-simple kind of way. I mean it much more broadly, where simplicity is the hub of your relationships. I’m also reflecting on spirituality. There are three or four things that define how I want to give my time. But within each of those, undergirding it, are simplicity and spirituality,

Joan: What do you mean by simplicity?

Lou: Well, everything from not being complicated to whittling down to what’s really essential. In fact, Anne had a book on her Kindle called Essentialism. The premise is, there are so few things that are truly essential. There are thousands of things that just aren’t important yet we manage to clutter up our lives with nonessentials if we are not intentional about our choices.

That leads me to my relationship with Jesus. All that we have to learn to understand and to grow is a quest toward greater unity and oneness with Christ. Just realizing that He is not just out there, He’s in here, in everybody and everything you’re encountering. And that leads to gratitude and appreciation. I can’t tell you how excited I am that I planted seven little gardenia bushes, and they’re all blooming. It’s their first year and they’re not even that fragrant yet, but the excitement! God is in those little white blossoms, and in the yellow leaf that fell off, too.