St. Paul’s very own Nola Daniel, member of the Parish Choir, a Daughter of the King, holistic healer, folk singer, and mother of seven children, comes from a family that played a central role in the preservation of the folk songs and stories of Appalachia. In 1916, when Cecil Sharp and Maude Karpeles were collecting ballads and tales in Hot Springs, North Carolina, Sharp went to Nola’s great-grandmother, Jane Gentry.

“Cecil Sharp collected more songs from my great-grandmother than from anyone else, more than 70 songs. Everybody said you should go see Jane Gentry and one other person – people said they were the ones who really knew how to sing these songs,” said Nola.

On August 24, 2019, more than 100 people came to Hot Springs for the Centennial of Cecil Sharp and Maude Karpeles. And you’ll never guess who was there.

This is her picture taken from the website Cecil Sharp in Appalachia. https://cecilsharpinappalachia.org/janegentry.html 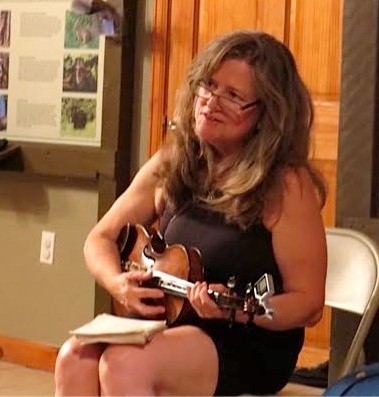 When she was a child, Nola and her family made frequent trips to Hot Springs for the Dorland-Bell Girls’ School reunion. (More about this school later.)

“We would go up there in the summer on vacation, though not every year. Mom would pile us all in the station wagon. My dad would usually stay home and work. He held two or three jobs. There are seven of us. The first time I remember much about it, I was in the fifth grade, I think.

“We stayed with Aunt Maud in the big house called Sunnybank. It was built as a boarding house. Aunt Maud taught all people in that area how to play the piano and organ. She knew all the words to all the songs in the Presbyterian hymnal.”

Hot Springs is on the French River, and Main Street is part of the Appalachian trail. Sunnybank is still a boarding house today. The present owner gives trail hikers special price breaks.

Why were so ancient many folk songs found in Appalachia and nowhere else in the USA? According to the above website, “Settlers established themselves in the Appalachian region of several states, including North Carolina, Virginia, Tennessee, Kentucky and West Virginia. In these isolated areas, the old songs of love, loss, murder, ghosts, and earlier times were passed down by oral tradition, expressing timeless themes and ties to the past.”

“Back then, people couldn’t just run up to Appalachia,” said Nola. “It was hard to travel there – it was up in the high mountains.” Because of their isolation, the people sang the same songs and told the same stories generation after generation.

Nola explains how the songs were discovered and made known to the world.

“Cecil Sharp was an Englishman and a music historian. He was visiting one of the rich landowners when he heard this beautiful singing, songs he had never heard before. He asked his host what it was. The host said, ‘Oh, it’s just the gardener. He sings while he’s working.’ Cecil was mesmerized by the music, so he listened and studied the matter and found out that the people of the region were singing these old songs the way they had been sung 200 years earlier. And so he came to hear and then capture the songs because it was the way they had been sung so long ago in the British Isles.”

Nola knows these songs, and she sings them beautifully. She can tell stories, too.

“My great grandmother was a singer of old English ballads. She was also a teller of the Jack, Will and Tom tales and also the Grandfather tales, which have been passed down via the oral tradition. My great aunt, one of my grandmother’s sisters, Aunt Maud, recorded the songs and stories for the Library of Congress. My sister Zola and her husband got a copy of the record and made us all cassette tapes of the songs and stories. My children and I learned them by listening to the tape in the car.”

Maud Gentry Long lived in Sunnybank in downtown Hot Springs. However, she and her siblings were all born out at Meadow Fork, about 10 miles north of Hot Springs downtown. The family kept sheep and used their wool to make their own clothing.

“On the Library of Congress record, Maud talks about how, in the evening, the family would all be busy. Father would be working on harness or other things he needed for the horses, and Mother would be cleaning, picking and carding the wool to get it ready to be spun the next day. The kids all had chores to do as well.”

And that’s when they would sing together and tell stories.

“I can almost quote Aunt Maud line and verse,” said Nola. “She said the songs and stories were ‘to keep our hearts merry and our eyes bright.’ Mother would tell the wonderful Jack, Will and Tom tales and sing the songs. I learned her way of singing through the tape I have. Joan Baez learned The Cherry Tree Carol from my Aunt Maud.”

“When I first came to St. Paul’s, William Fred Scott was there. He played The Cherry Tree Carol and Wondrous Love, two of my favorite songs of all time, and I told him how much I enjoyed his playing them.”

Nola sings The Cherry Tree Carol from her book, Jane Hicks Gentry: A Singer Among Singers, written by Betty Smith. “She is a cousin of my Mom’s,” said Nola. 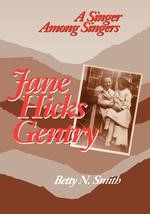 “My grandmother was born in 1898,” said Nola. “She was the second or third child of thirteen children. There is a story in this book about her when she was a baby. The family, including her mother, were working on a hill side clearing trees. She nursed her baby and then put her to sleep in a piece of bark. When it dried, the bark curled up and rolled down the mountain, baby and all. Suddenly the family noticed she wasn’t there anymore. After a frantic search, they found her down the hill, still sound asleep, rolled up in the bark.”

As well as singing together, the family would listen to stories, many of them known as the Jack Tales. One of those tales, Jack in the Beanstalk, comes to us from the British tradition.  But there are a lot of other tales about Jack, as well as his two brothers, Will and Tom, that hadn’t made it into popular culture, either British or American. However, they survived in Appalachia, passed down orally, and today are published in books and told at storytelling festivals.

“There is a whole collection of these stories,” said Nola. “They are about a family of three brothers who get into all kinds of trouble. There are a number of stories on my cassette tape. ‘Jack and the Bull’ is a really funny story. The stories they told children then were about real life. They were pretty macabre. The phrase ‘Haggy old witch of a woman’ appears frequently. There was always one in the story.”

Below is one of several publications of the stories collected by Richard Chase. 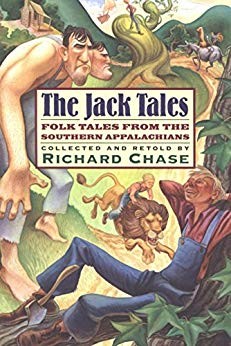 “In the last fifty years, Jack Tales have come to occupy a privileged position for scholarly analysts of folklore, for popular purveyors of folklore, and even for folk themselves. … As far back as English-language folktales can be traced, there are stories about Jack. From the fifteenth century, when ‘Jack and His Step-Dame’ was set down in rhyme in England, to the present, when Ray Hick’s rendition of ‘Jack and the Three Steers’ dominates the National Storytelling Festival, one name above all others has been associated with magic tales in the British-American tradition. Yet the relation between the earlier Jacks and the most recent is difficult to trace, since no oral Jack Tales have survived from distant centuries.”

These are the stories Nola’s ancestors told as they did their evening chores.

Another piece of history that includes Nola’s family was the Dorland-Bell School in Hot Springs.

According to Wikipedia, “The Dorland-Bell School was a mission school in Hot Springs, North Carolina, USA. It was founded in 1886, when Luke and Juliette Dorland, Presbyterian missionaries and educators, retired to Hot Springs. At the request of area residents, they established a school in Hot Springs and soon were teaching 25 students in their home.

According to Nola, “Before the school was started, there was no schooling available for girls. The boys were given some education, but it was not considered necessary to educate girls except in the skills needed to run a household. My grandmother, born in 1898, attended that school.”

According to Wikipedia, “The John C. Campbell Folk School . . . was founded to nurture and preserve the folk arts of the Appalachian Mountains. It is a non-profit adult educational organization based on non-competitive learning. Founded in 1925, the Folk School’s motto is “I sing behind the plow.”

If you’ve ever thought there was something special about Nola Daniel, well, you were right. She is the embodiment of a unique chapter in American history and culture.